Now That Wasn’t So Hard, Was It?

The engine in PFKATBR was producing much non-Porsche type vibration. Like rattle the floorboards vibration. Knowing that it had been off the road for a considerable length of time and that it uses hydraulic motor mounts, my first thought was that while sitting a motor mount had ‘settled.’ That thought led to purchasing replacements. Not actually replacing them, but preparing to replace.

Then one morning in the shower, (We all do our best thinking in the shower, right?) it occurred to me that the last work that had been done involved the removal of the the timing and balance shaft* belts. Could the shop have erred in timing the shafts? Occam’s Razor says yes. Simplest solution is most likely the correct one. So that was the direction we proceeded. Since timing belt work involves labors both above and below the motor, I elected to contract it out.

There is a small shop here that has worked on imports for as long as I’ve been in this part of the world. A few years ago, the chief mechanic/technician purchased the business and has seemingly done well. I have spoken with him from time to time and always had a good feeling about his honesty and technical ability. He did some work on our Volvo last year and came in ahead of schedule and under budget, so I elected to offer him the work.

When I called, he told me that he had no experience with 944 Porsches. I sent him a YouTube vid of the process and waited a day. When I called again, he accepted the job.

I opted to provide the parts since I already had the motor mounts and so ordered a belt kit for an 85.5 944. A belt kit consists of the timing and balance shaft belts and replacements for all the idler and tensioning pulleys. Parts were delivered, the appointed day arrives and off we go.

In the early afternoon, the call comes that one of the idlers in the kit is not the same as what’s bolted on to the engine. Turns out that there are two different sized parts. One 32 mm in diameter and the other 46 mm in diameter. The kit came with the former and car came with the latter. So where to find the needed part? 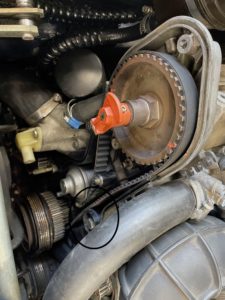 A quick dive onto the Internet shows that 46 mm diameter Porsche timing belt idlers are not difficult to find, but that the nearest one is in LA. $20 for the part and $50 for overnight shipping and the problem is solved.

Part delivered and a couple days later, (and Porsche Parts Prices not paid for local labor) the car is picked up. New belts, bearings and motor mounts all installed. NOW it drives like a Porsche.