Today’s project was determining why the low fuel light illuminates with a full tank of fuel.

According to the Internet Tubes, this is a common problem easily and more importantly, cheaply rectified. One simply lifts the carpet in the rear, removes the small square of insulation, lifts the cover, unplugs a connector, removes 2 fuel hoses and removes the sending unit. Clean the contacts and put it all back together. Ought to be a piece of cake.

Not so much. The carpet and the insulation came out as advertised. That’s where things went a little south. There’s this plastic cover that sits over the hole in the floor through which one accesses the fuel sending unit. It’s supposed to just sit there. Held in place by the previously mentioned bit of insulation and gravity. Some time in the past someone felt that gravity might not be sufficient. So they glued it down. Lacquer thinner and patience got it off. Now we can get to the sender.

Pulled the plug on the wiring, removed the fuel lines and the retaining collar holding the sender to the tank. Sender no move. Pried on it a bit before deciding that brute force and ignorance shouldn’t be the order of the day. Break it and the car’s not drive-able. So we put it all back together. We’ll dig into it further when the gas tank isn’t full and we don’t have a service appointment in a couple days.

While putting it back together, the connector to hook the wiring to the sender kind of fell apart. That brings us to the title of this missive. The Three Ps. “Porsche Parts Prices.” This connector is literally a 1″ cube of polystyrene with 5 molded holes in it. It has a second part that snaps on to hold the wire connectors in place. It is used on most 911/912/914/944 cars. Manufacturing cost? Maybe a dime. Seeing that Porsche is a luxury marque, one might expect to pay say, ten dollars for it. 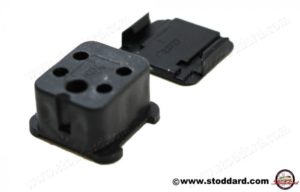 1 Response to The Three Ps.