The PO (Previous Owner, in forum-speak) warned me.  She said that occasionally the speedometer would quit but would start again when the car traversed a bump in the road or when she rapped gently on the dashboard.  It took a while for me to experience the phenomenon, but as soon as I did, I turned it over to the Master of All Things German Electrical, Jason.  He exhaustively tested all the related circuitry, pulled the instrument cluster, ultimately concluding that there was a irreparable  fault in the flexible circuit layer/wrapper itself, and that the most economical route would be to replace the entire cluster itself.  While we had the cluster out, we replaced the notoriously failure-prone odometer gear with a better-than-stock modern counterpart (I’m told that this substandard plastic piece is a VW-Audi part that eventually disintegrates) as a pre-emptive measure even though the odo worked fine so long as the speedo was running.

Faced with a $940 quote for a new speedometer and a $500 quote for a speedo shop rebuild, especially given Jason’s diagnosis of the cluster circuit flexboard, I soon started shopping eBay, Craigslist and anybody who might be parting out one of these things.  First false start was finding one in Denver, but it had a curious rattle and at least one of the gauges was visibly awry.   Returning it and securing a refund, we pressed on.  Eventually, we sourced a decent-looking cluster from San Diego.   Because Jason had already enhanced the original odometer, we swapped it for the new cluster’s unit, which, sure of enough, had a fragile-looking gear on the verge of collapse.  Happily, this made everything legal, too, as the original odometer’s mileage reading would be intact.

Finally … success.  Everything (well, almost) works beautifully now, a ruggedized odometer gear is in place and Jason even reports that the voltmeter is more accurate than the original.  The qualified success has to do with the fuel level gauge which shows an-always-on reserve light and never-quite-full reading.  Having tested just about every other link, Jason concludes that the issue may be with the fuel tank sending unit, a low priority (and about $200 for a new replacement) that can easily wait for later.  And the parking light warning light (whose absence I had never noticed originally!) works, as does the upshift light (who ever pays much attention to that anyway?).  The crazy MPG gauge works just like the original did … hardly a critical display of essential, actionable information

So we are left with an old cluster that appears to be more or less worthless, except that its tach always worked perfectly and is surely still worth going on to another life.  I see that a new replacement tach (944-641-952-06-OEM) goes for about $765, so it is probably worth salvaging and eBay’ing. 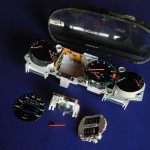 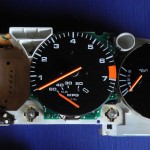 The Tach Should Still Be Good 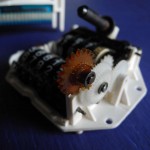 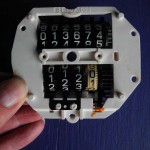 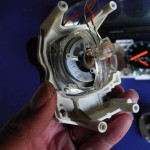 We Don’t Need This 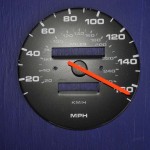