Fending Off The Inevitable

The time has come. The Blue Rascal is now in wonderful driving and operating condition, after several months of various fixes and tweaks. Winter’s comin’ on. So maybe we can finally start addressing the various body/paint anomalies, starting with that nasty front driver’s side fender.

My intention is keep driving the Rascal throughout the seasons, as that is easily the most pleasurable aspect of ownership for me, so only a chunk at a time will be targeted. I know it would be tempting to disassemble the whole darn thing and put it back together, but where would that end up? I have neither the time nor funds for a complete redo, so we will just try to get it straight and a bit less bottom-feeder in its stage presence.

So, under rainy skies,  I toss my spare fender into the Hardbody (aka Nissan D21) and head for Eric’s shop. Eric has most graciously made his shop available on Saturday mornings, beyond normal business hours, to me and a few others to work out our demons, under his watchful and learned eye. We inspect the fender, Eric taps out a few hill-and-valley spots — this is a 28-year-old used fender, after all — and we remove the side molding and start a little preliminary sanding to expose the uneven spots. 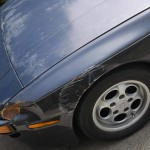 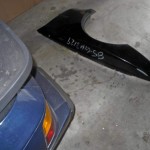 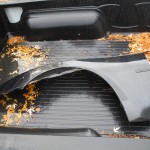 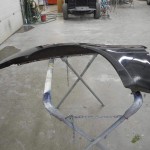 Setting Up In Eric’s Shop 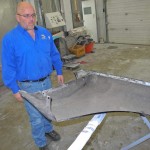 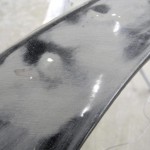 Some Hills and Valleys

Mostly today I look in on Chris and his work, hoping to pick up a little savvy. Chris is not only a dyed-in-the-wool car guy and a fellow gray-hair, but we find lots of room for discussion in another mutual interest area — photography. Chris was once a photographer in the Marine Corps. Chris’ current project is restoring a ’52 Chevy sedan delivery and today he is working on the single biggest challenge he has: rebuilding the rear door. When he started, he had to build up some 8 or 10 inches of new material to the door bottom and weld in about two-thirds of the outside panel in new metal. The Blue Rascal’s needs seem to be child’s play by comparison. (Or at least I hope so.) 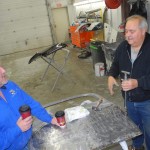 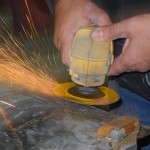 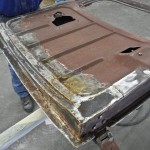