Today’s body shop meeting at Eric’s brought the news from Dennis that his 550 model hit the concrete and broke, but he is turning the rebuild into an improvement.  In the meantime, Chris fine-tunes his door prep with the aid of the Hustler; Chris and Eric repair a dust vacuum  while I-forgot-his-name-but-not-his face looks on;  we move aside a long-term Camaro project (allegedly about to undergo yet another color change to improve its show-time potential, bringing its invested sum up to … $$$$$ … well, let’s just say that the amount would buy at least a dozen of my car)  temporarily aside; and I move a couple of steps closer to readying my replacement driver fender for primer and install. 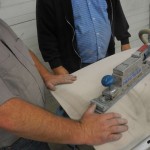 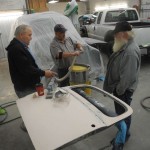 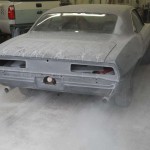 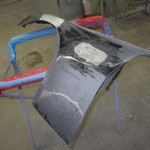 This entry was posted in Uncategorized and tagged dennis hoyt, leh photo. Bookmark the permalink.