A few minutes ago, I watched the complete first episode of AMC TV’s Halt and Catch Fire, a new drama premiering on June 1 (you can watch online at amctv.com in advance for the next seven or eight days).

The series is set in 1983 Texas early in the personal computing revolution, which is what attracted my attention to begin with, as I had been deeply involved in that era myself since the mid- or late-70s.  But there turns out to be more than just the historical impact of the IBM PC and the frenzy of innovation and adventure of the times that speak to me.

Not much more than thirty seconds in, we see a 944 NA in full stride, only to connect with an armadillo unlucky enough to be crossing the street over the rise. 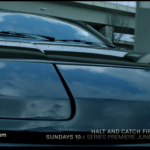 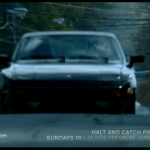 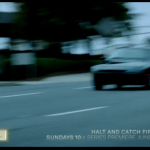 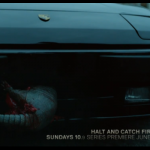 Since I was “there”, I will undoubtedly keep on tracking with the series, unless it turns out to be a total stink bomb.   And now I will be watching for more scenes featuring the ’44.  I can report that the thing runs phone dials but I haven’t been able to garner too much more detail yet from these quick glimpses.

Oh, yes, MacKenzie Davis’ Cameron Howe character (a prodigy student programmer/designer/engineer) does bring back memories of Deborah Harry and other punk goddesses of the era, as well.

Halt and Catch Fire (HCF), by the way, refers to a fatal computer instruction in assembly language from back in the old days — I think that it originated sometime in the 70s with Motorola processors; could be wrong about that — that brought a machine to a complete, unrecoverable stop.

1 Response to Halt and Catch Fire