Now that the kids are both making their way into adulthood, wife Kim and I find that we must fill out the time increasingly on our own. Sometimes, like yesterday, this means extended rides, as well as shopping errands, in the Blue Rascal. And then there is at-home evening entertainment …

We both happen to like good cop dramas, but with the exception of a few outstanding series like HBO’s The Wire, often find ourselves seeking out Brit and other international productions for high quality fare. We have just streamed the 2011 first season of The Bridge, a Swedish/Danish TV thing (not to be confused with the mediocre American series of the same name) starring Sofia Helin as Saga Norén. Saga, the lead Swedish homicide investigator, drives a wonderful olive-green Fuchs-equipped 911S, circa 1977. In one scene, she is even seen defending her choice of conveyance, despite what one might expect on a police salary. 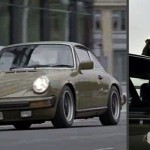 The Porsche appears frequently and with the loud pedal down, emitting glorious exhaust notes, and is an interesting complement to the Saga character’s personality and cool, matter-of-fact, decisive, tell-it-like-it-is manner — characterized as “odd” and “lacking people skills” by her co-workers , but suggesting to me that she is somewhat autistic, perhaps with Asperger’s syndrome (just based on some friends I know with these conditions). Anyway, the 911 scenes are great, and the series is terrific and recommended for its creative writing, fine acting and multidimensional character development. Is there a parallel with automobiles? Why is it that Americans often can’t get it quite right, whether cars or movies/TV?

Check out the following interview, and pick up the Porsche comments between about 1:26 – 1:55:

This entry was posted in Art, At Play. Bookmark the permalink.