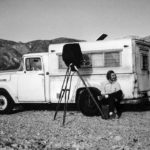 Bill and His Foto-Truck Death Valley 1976

My dear long-time friend and former partner/collaborator in photography and art has passed.  He deserves mention in this setting as we shared enthusiasm for motorsports and interesting automobiles.  Bill had a side gig designing, fabricating and repairing race car bodies (mostly in fiberglass, given his surfing spinoff of building boards).   And we customarily attended the Long Beach Gran Prix and chased auto shows and events. 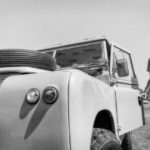 Bill did enjoy riding with me in my 911 to scout photo locations and just cruise around LA, but our most epic trips were via my VW camper and our Land Rovers.  Bill famously also took his old Volvo (can’t remember if it was a PV444 or 544) — the same one he drove around LA, keeping a gallon of gas in the trunk for those often-arising emergencies — on an expedition through the Yucatan and into Central America, ultimately requiring assistance from a blacksmith in a small village to patch up a broken U-joint sufficiently to allow his return, safely but noisily, to Long Beach.

Much more, and growing, on Bill at my photography blog.

UPDATE:  Just found a letter from Bill telling how the Sultan of Oman put a BMW 635csi at his disposal while he was building a stained glass dome (stained glass was part of Bill’s skillset) for a new palace.

This entry was posted in .. it Happens. Bookmark the permalink.