So I walk in to Eric’s today for our traditional Saturday morning go, and Dennis tells me that, as the resident Porschephile, I just might be interested to see the Porsche 550 project underway in the back.  What???  No way, I say.  But Dennis leads me to the area of the shop where he is working on his latest project, a commission from Jerry Seinfeld to do a sculptural interpretation of Seinfeld’s restored 550.  We can see two pieces in primer, which Eric proceeds to take into the paint booth and apply silver spray.  I watch as Eric and Dennis do a little hand-sanding on the pieces, then we all look in on Chris’ major ongoing Chevy sedan delivery project, still honing his rear door to perfection. 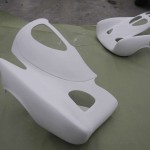 Ready for the Paint Booth 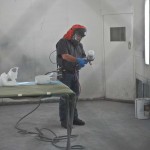 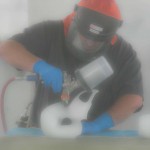 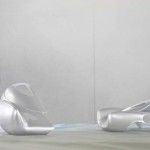 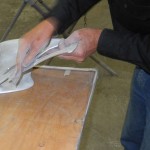 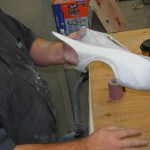 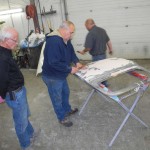 NOTE: If you want to see what a real-life Porsche 550 looks like, take a look at my Portland Art Museum post of several months ago.

Let’s talk about Dennis for a bit.  This guy is a one-of-a-kind artist who does one-of-a-kind automotive art.  His medium has mostly been wood, but he is also inlaying metal into wood, and has created molds for bronzes, and more.   Porsches and Ferraris show up frequently in his work, and he does tributes in his personal work to the greats in the racing world, since the time Stirling Moss first contacted him.  Dennis doesn’t just do nice models; he creates the illusion of motion and action in his forms.  Go to his website at http://dennishoyt.com and let his work blow your mind.   In the meantime, Dennis and I inspect and admire the curvaceous body of the 944, discuss the relative handling and performance characteristics of the 917 and the 956, and Dennis tells me that he is considering opening a gallery downtown to display his work.

This entry was posted in At Play and tagged 550, dennis hoyt, leh photo. Bookmark the permalink.

1 Response to The 550 Surprise